On a warm autumn day, as waves gently wash over the sand, there are few better places in the world than Bondi Beach.

But the large crowds of sunbathers, swimmers and surfers flocking to the popular beach in the past few days have been criticised for ignoring health advice about social distancing and restrictions on public gatherings implemented in response to the coronavirus pandemic. 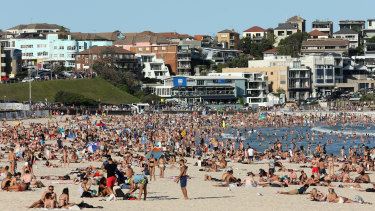 Beachgoers are seen at Bondi Beach on Friday despite the threat of novel coronavirus (COVID-19) in Sydney.Credit:AAP

In response, the NSW government announced on Saturday it would shut down the beach.

"I am frustrated that people continue to ignore health advice about social distancing as observed yesterday at Bondi Beach," she said.

There were less beachgoers on Saturday morning as Keith McNaughton prepared to swim in the ocean with his friend Mary. 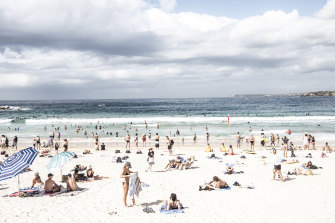 There were less beachgoers on Saturday morning st Bondi Beach before the government announced plans to shut the area down.Credit:Steven Siewert

Mr McNaughton said he was visiting the beach to maintain his physical and mental health.

"I’m trying to apply some reasonable risk management," he said. "But for me it’s important for my mental health to keep doing exercise."

However, Mr McNaughton said he had adjusted his regular routine to avoid crowds: "It’s pretty busy down here but we’re going to have a swim out the back."

"So am I worried about it? I’m trying to keep away from people and isolate per the government guidelines." 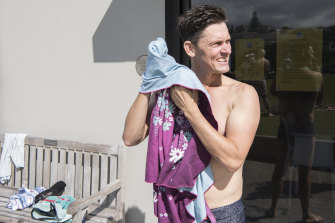 Mr McNaughton said he had taken his children to Clovelly on Friday, but had left when it became too busy.

But he said: "It’s important they allow the community to still go out and get exercise appropriately."

Sam Sirianni, who regularly runs and swims at Bondi Beach, said he was "not really" worried about visiting the beach.

"I keep my distance from people," he said. "As you can see, I’m laying by myself."

Mr Sirianni, from Double Bay, said the crowds at the beach were a problem but added: "You can’t stop people from living. That’s the way I look at it. If it’s a nice day and I want to have a run and a swim, well I’m gonna go do it."

However, Mr Sirianni said he would accept a lockdown if it was imposed: "But at the moment, if they’re telling us to keep 1.5 [metres] away from people, well, let’s go by that."

Other beachgoers interviewed by The Sun-Herald expressed similar sentiments, although they declined to give their surnames.

Diego, from Chile, said he had come to the beach for "just a quick walk" after avoiding it last week.

"We’ve been trying to keep ourselves in our houses for a while but I think that getting some fresh air during the morning is a good thing," he said.

Belinda, from North Bondi, said she had arrived at the beach early when there were few people around.

A regular beachgoer, Belinda said she was concerned by the large numbers of people at the beach who did not appear to take the pandemic seriously.

"Did you see yesterday?" she said. "It was outrageous."