DRONES are being used to monitor public spaces as a major new tool to slow coronavirus spread across the US.

The drones can detect social distancing, body temperature, heart rate, and even when people cough, but apparently "don't identify individuals".

Canadian company Draganfly announced that it is in talks with private companies in the Seattle area and could be coming to the Pacific Northwest within months.

The CEO of Draganfly, Cameron Chell, says seeing drones in the sky is about to become much more common.

“We’re going to see this deployed on-scale across the United States in a couple of months," he told WPXI.

Infrared technology on drones is already being used by first responders and Fire and Rescue to search for people who are missing.

Draganfly stated there is no facial recognition in the technology, and the information isn’t tied to any one person.

The drones can, however, be used to scan a crowd and figure out if a higher percentage of people than normal have fevers or are coughing, providing leaders with real-time data to help make decisions.

FLORIDIANS AND NEW YORKERS TOLD OFF BY DRONE

In Daytona Beach, Florida, drones are already in the sky patrolling beaches and telling residents off via speakers that blare: “Because of COVID-19, this park is currently closed”.

There was a similar incident in a New York park in April.

The police department in Daytona Beach said it has tested but not deployed the temperature scanning technology.

In other countries, such as Columbia, the drones’ full capabilities are used to scan crowds.

Drones spray disinfectant in South Korea and warn residents to keep their distance in China.

Some people say they’re open to the idea of “pandemic drones" to maintain social distancing rules.

Ariel Eccetturo said: “If everybody wants everything to get back to normal and we want to get back to our lives, then it’s probably best we do something like that.”

However privacy advocates have said that they would feel invaded and have expressed concerns about where the line is on monitoring the public and other law enforcement uses.

Chell wouldn't say which cities or companies they are working with to launch their drones across the US. 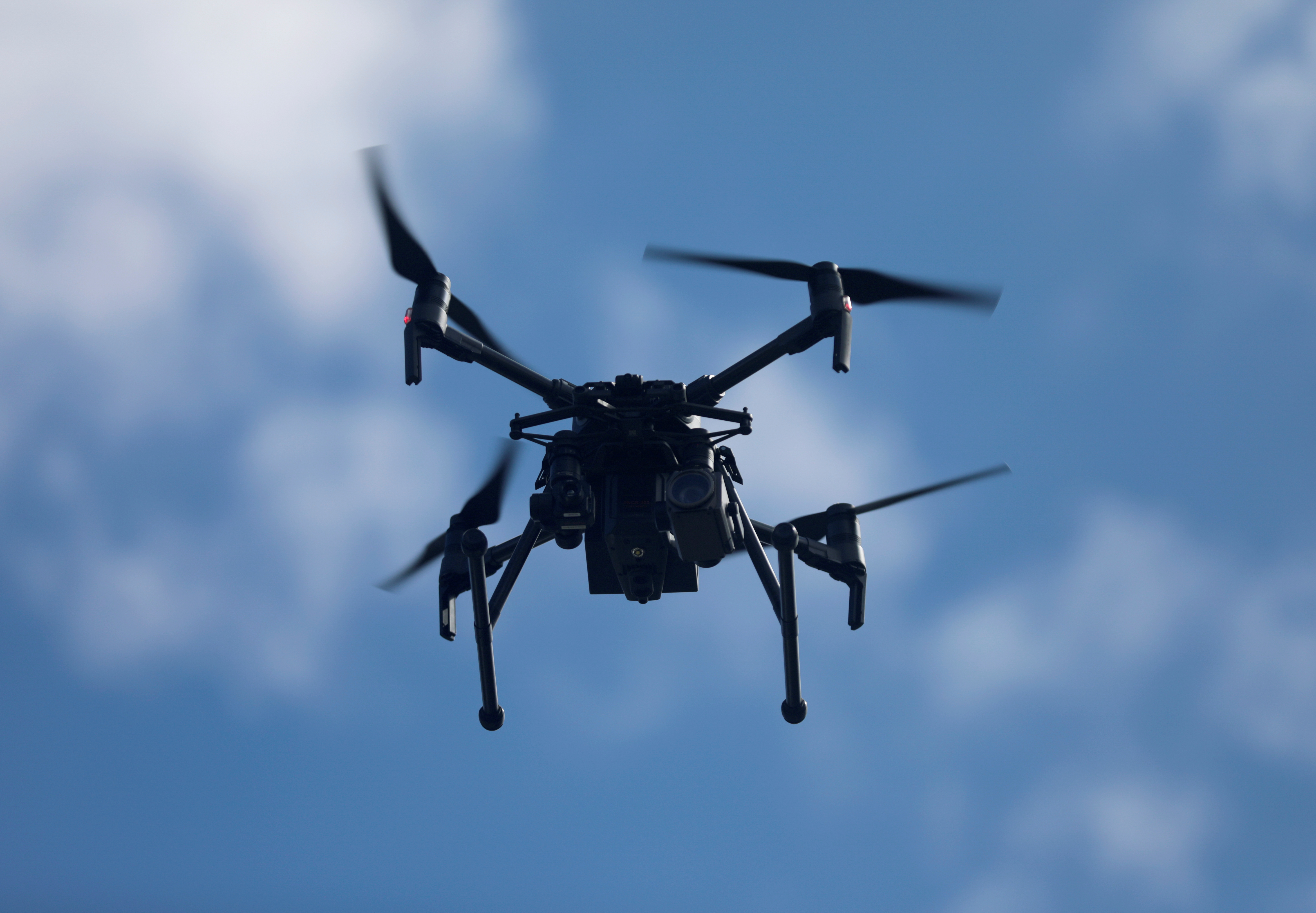 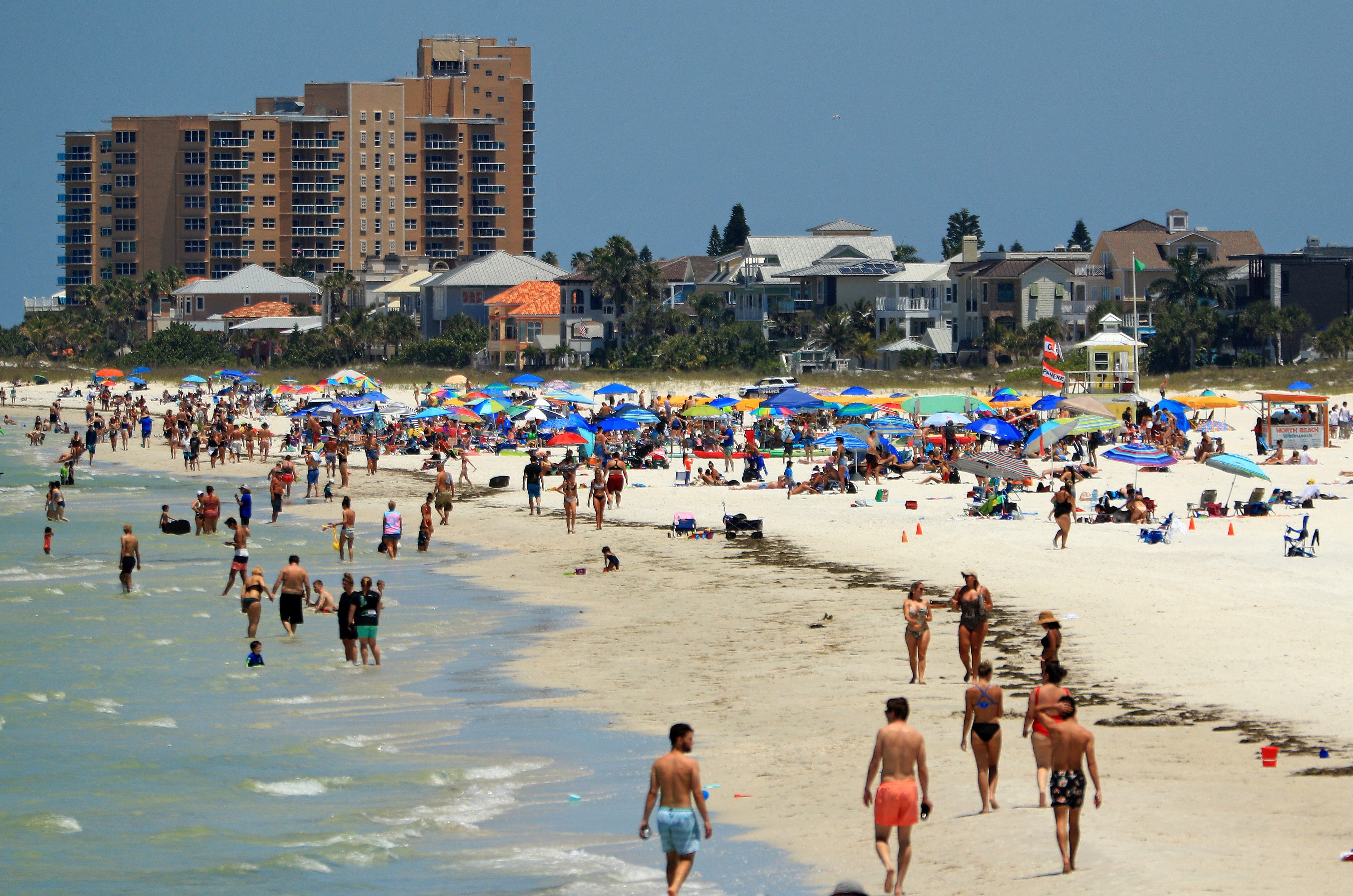 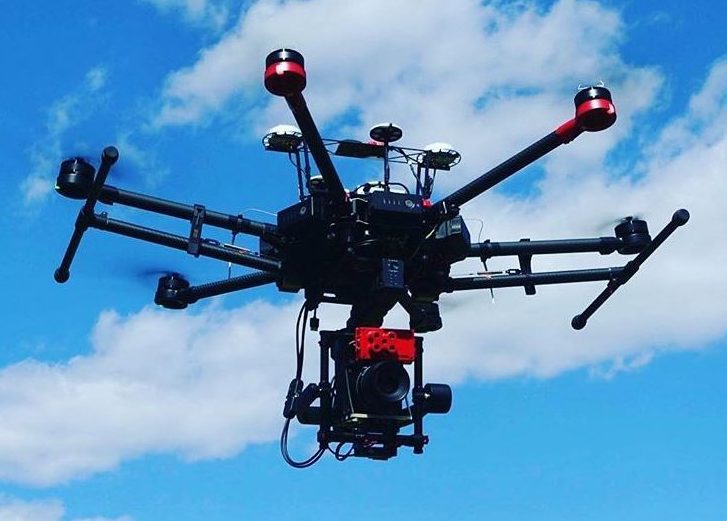 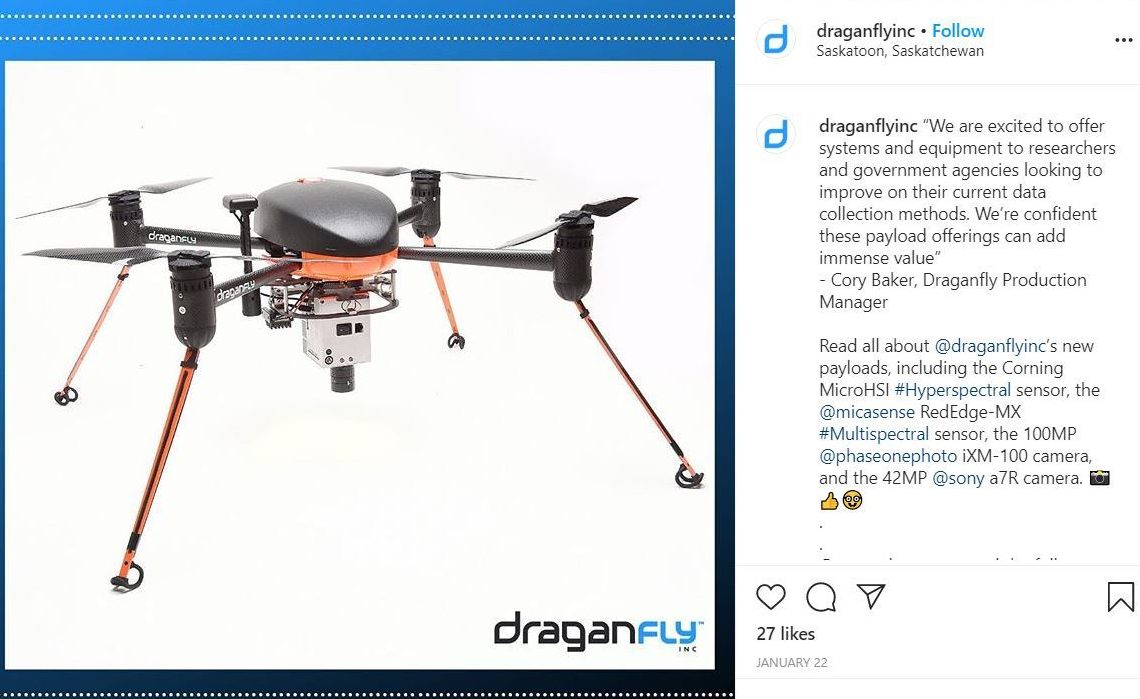 Researchers from Scotland have created a 3D model of Peru’s glaciers using specially designed high-altitude drones, part of an ongoing effort to study the relationship between the glacier’s melt rate and surface temperature.

The project was led by Rosie Bisset, a doctoral student from the University of Edinburgh, who traveled to Peru with field assistant Callum Reay to gather the data firsthand.

Peru’s glaciers account for around 70 percent of the world’s glacier area in the tropics, and the waters produced by they produce through seasonal melting have helped support towns and villages in the region with agriculture and hydroelectric power generation. 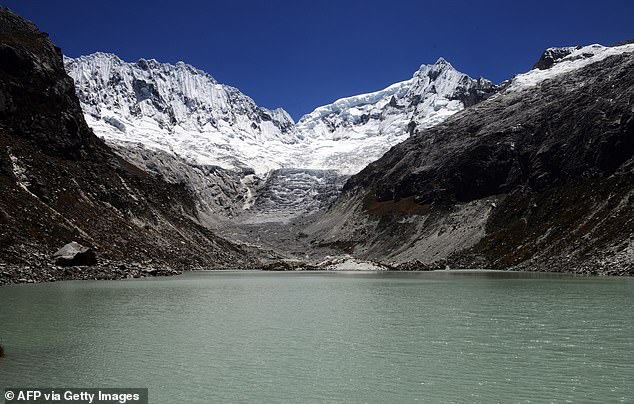 Researchers from Scotland traveled to Peru with a pair of specially designed high altitude drones to gather data for a 3D map of the country’s glaciers, to help learn more about why they’re melting so quickly

Over the last two decades, Peru’s glaciers have shrunk by almost 30 percent, threatening the way of life and livelihood of many in the region, according to a BBC report on the project.

Bisset wanted to create a 3D map of the region’s glaciers, which would allow researchers to precisely track changes from year to year, as well as measure surface temperatures at different points of the glacier.

Bisset worked with Skytech Aerial to build two high altitude drones ready for flight at 15,000 feet and above.

The drones had propellers designed to spin at much high speeds than normal commercial drones to help create lift in the thin air, something that came with the downside of extra power consumption through the battery.

Bisset and Reay spent several days and nights camped atop Peru’s glaciers piloting the two drones across the terrain, gathering data with both a visible light camera and a thermal imaging sensor. 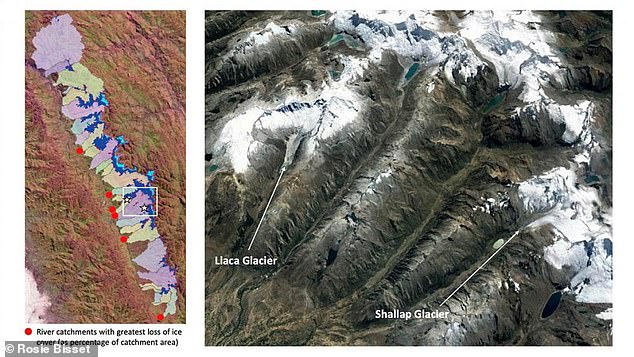 The team spent several days hiking through some of the country’s glaciers and piloting the drones over the terrain, gathering spatial data and temperature about the ground temperature on the surface of the glacier with thermal sensors 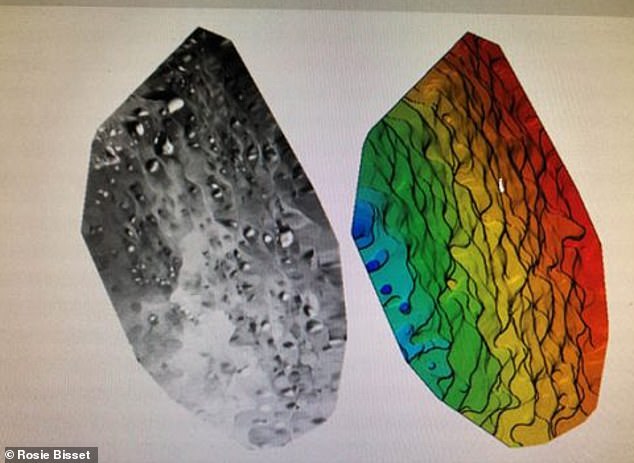 The final 3D model blends features colorful tiles representing temperature on the surface of the glacier, which are laid over the model like a mosaic 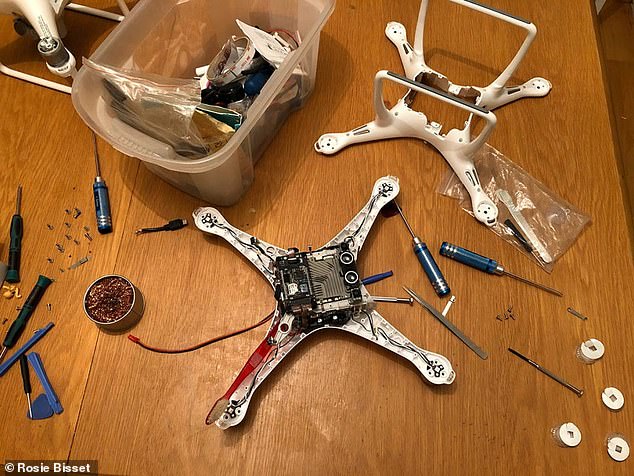 The team used custom-designed drones with propellers that rotated at a much higher rate than commercial drones, which helped them generate lift in the thin air at altitudes above 15,000 feet 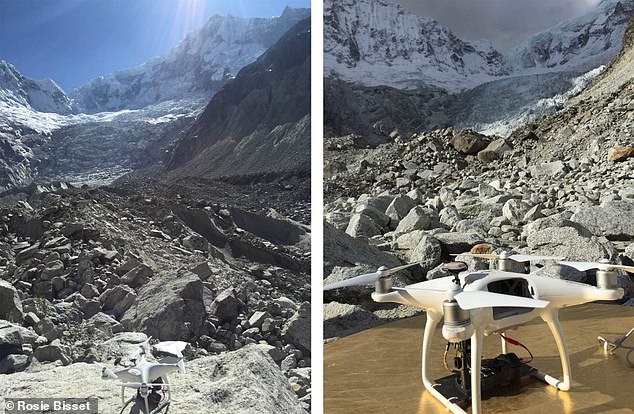 The drones were able to capture a range of data and detail that satellite imagery can’t match, blending thermal sensor data with visible light images

The pair returned to Scotland and then used their captured data to create a detailed 3D model of the glaciers.

They used the thermal sensor data to add a layer information about the surface temperature on the glacier, which they laid on top of the 3D model in colorful mosaic squares. in mosaic squares.

‘We can compare this to 3D models that were collected in previous years in order to tell us how the glacier’s structure and size is changing,’ Bisset said.

Because drones are able to fly closer to their targets and capture a wider array of information, Bisset’s project promises to give an even more detailed view of glaciers than satellites have so far been able to.

‘We’re talking about very high resolution imagery, sub-millimeter resolution in some cases, which you just can’t do with satellites at the moment,’ said Thomas Wade, a pilot who worked with Bisset on the project.