Hero who rescued scores from the Titanic… then did it again at Dunkirk: Eighty years ago Charles Lightoller plucked 130 desperate soldiers from France’s shell-torn beaches. None of them knew it was not the first time he had saved lives in a crisis 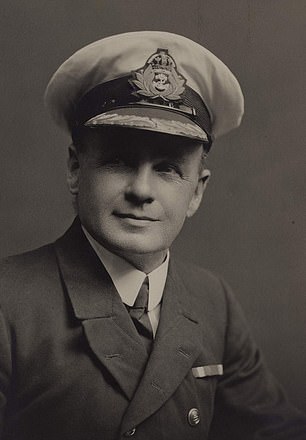 Even before Charles Lightoller joined the Titanic, he had packed a great deal into his 38 years. He went to sea at 13 and the following year was shipwrecked on an island in the Indian Ocean

Standing at the helm of his 52ft family pleasure cruiser Sundowner, Charles Lightoller, 66, could see in the distance a black cloud of smoke hanging over the French port of Dunkirk.

Anti-aircraft guns were firing at German fighters and dive bombers attacking thousands of helpless British troops on the beaches.

With a crew of just Charles, his eldest son Roger, 34, and an 18-year-old Sea Scout named Gerald Ashcroft, Sundowner was one of hundreds of ‘little ships’ on a desperate mission to bring the stranded troops home.

Suddenly a Messerschmitt 109 fighter appeared ahead of Sundowner, approaching fast and low, closing for the kill. Charles and his small crew were unarmed and defenceless.

This was not the first time that Charles Lightoller had stared death in the face.

Twenty-eight years earlier he was the Second Officer on the most famous ship in the world, the Titanic, with the task of getting women and children aboard the inadequate number of lifeboats before the great liner sank beneath the freezing waters of the North Atlantic.

Even before Charles Lightoller joined the Titanic, he had packed a great deal into his 38 years. He went to sea at 13 and the following year was shipwrecked on an island in the Indian Ocean.

In 1898 he left life at sea to take part in the Yukon gold rush, and when that proved fruitless he became a cowboy, travelling back home as a hobo on the railroads and then as a cattle-wrangler on a cargo ship. 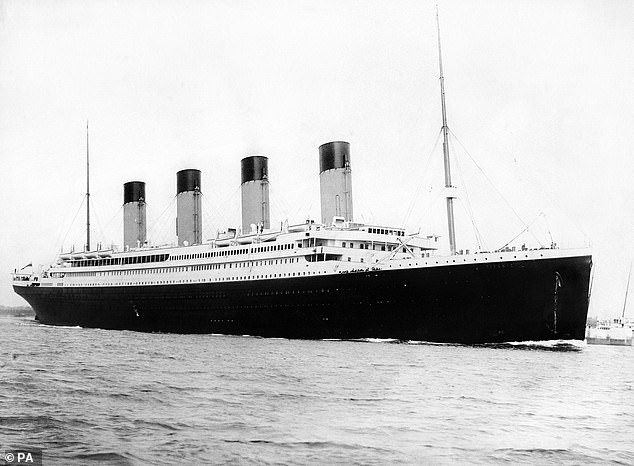 Charles found himself surrounded by the drowning, ‘an utter nightmare of sight and sound’. He reached an upturned lifeboat and was able to cling on, with 30 other men. At 2.20am he saw the stern of the Titanic slip under the sea

In 1900 Charles joined the White Star Line shipping company. He boarded the Titanic for her maiden voyage in April 1912. It took him days to find his way from one part of the huge liner to the other by the shortest route.

On April 15, soon after the Titanic hit an iceberg, Charles was ordered by the captain to supervise the loading of the eight lifeboats on the port side.

He hastily put trousers, a sweater and a white muffler on top of his pyjamas and went to work, determined to launch the lifeboats quickly even if it meant empty seats.

When he saw Molly Brown (later called ‘the unsinkable Molly Brown’) walking away from a lifeboat, he picked her up and carried her back in with a cry of: ‘You are going in, too!’

A little later, when the millionaire John Jacob Astor asked Charles if he could join his pregnant wife in a lifeboat ‘to protect her in view of her delicate condition’, the Second Officer refused point blank, determined to enforce a policy of ‘women and children only’. 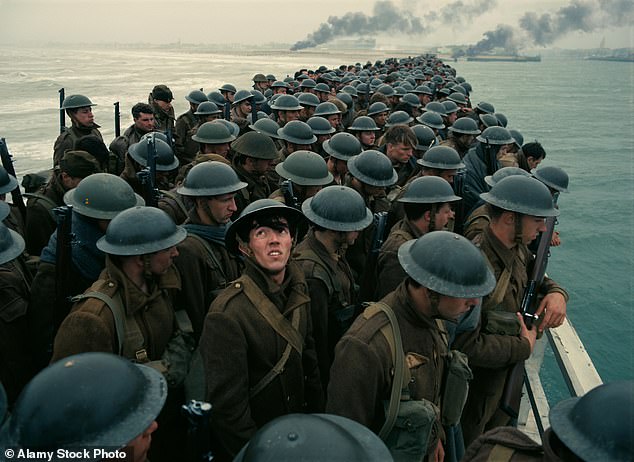 As he worked, Charles could hear the ship’s band playing. ‘I don’t like jazz music as a rule’, he later commented, ‘but I was glad to hear it that night. I think it helped us all.’

From the top of a staircase he could see the rising water below. ‘That cold, green water, crawling its ghostly way up that staircase, was a sight that stamped itself on my memory.’

Charles eventually jumped into the freezing water and was sucked downwards. He was convinced he would drown, but was saved when a vast bubble of hot air suddenly exploded from the depths of Titanic and he was pushed towards the surface. Charles found himself surrounded by the drowning, ‘an utter nightmare of sight and sound’.

He reached an upturned lifeboat and was able to cling on, with 30 other men. At 2.20am he saw the stern of the Titanic slip under the sea. ‘She’s gone!’ cried the men, all sitting or standing on the slippery hull.

When the sea began to get rough, Charles formed the men into two columns and barked out orders to keep the lifeboat steady: ‘Lean to the left! Lean to the right!’

After about two hours in the freezing water, they were rescued by the liner Carpathia and taken to New York.

A year after the sinking, Charles got into a cold bath following a long game of tennis.

The water brought back such a rush of terrible memories that he went into a trance and had to be pulled out by friends.

Although at the Titanic inquiries Charles defended the conduct of Bruce Ismay, the White Star Line boss who had been accused of encouraging Captain Smith to speed despite the ice danger, the company was embarrassed by anyone connected to the disaster and Charles was never given his own command.

The Royal Navy, however, recognised his talents, and during World War I he was given the command of torpedo boat HMTB-117.

His fearlessness showed itself once more when, in July 1916, he attacked a Zeppelin using the ship’s guns, for which he was awarded the Distinguished Service Cross.

Two years later, in command of the destroyer HMS Garry on the hunt for German U-boats (which he detested for sinking the liner Lusitania, killing 1,198 people), he rammed and sank UB-110.

HMS Garry’s bow was so badly damaged Charles decided the only way she could sail the 100 miles back to port was if she reversed all the way, stern first.

Twenty-two years later, on May 31, 1940, Charles Lightoller, now long retired, received a call from the Admiralty requesting his assistance to the rescue the troops stranded at Dunkirk.

He didn’t hesitate to volunteer his pleasure cruiser Sundowner, but he refused to allow the Royal Navy to sail her across the Channel. 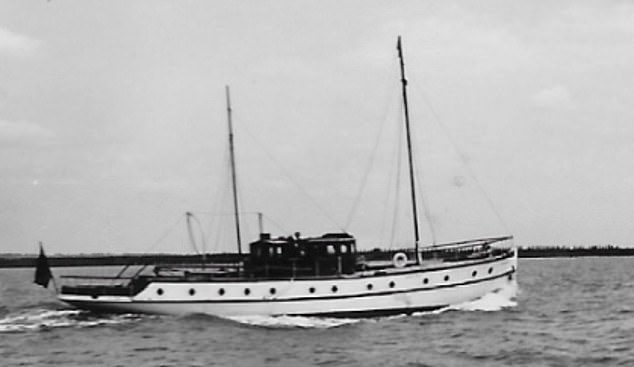 Twenty-two years later, on May 31, 1940, Charles Lightoller, now long retired, received a call from the Admiralty requesting his assistance to the rescue the troops stranded at Dunkirk

‘If anybody is going to take her over, my eldest son and I will,’ he said.

The very next morning, together with Gerald Ashcroft, Charles and Roger sailed from Ramsgate.

Three hours later they were off the coast of France and face to face with a deadly Messerschmitt 109. But Charles Lightoller, the highest ranking officer to survive the Titanic disaster, wasn’t going to go down without a fight.

Roger was in the wheelhouse and Charles was standing on deck, gazing intently at the fighter. His youngest son Brian, an RAF bomber pilot killed in the first days of the war, had told him that when a Messerschmitt 109 is about to open fire, it lifts its nose by about 10 to 15 degrees.

Charles watched and waited, praying Brian was right. The fighter’s nose lifted and he shouted ‘Hard a-port!’ and Sundowner turned sharply. Machine-gun bullets hit the water but not Sundowner; the Messerschmitt roared overhead and turned for another attack.

Once more the nose lifted. ‘Hard a-starboard!’ Charles yelled and Sundowner once more dodged the bullets. After one more unsuccessful attack the German flew off to find an easier target. ‘He gave it up as a bad job’ Charles said.

By the time Sundowner reached Dunkirk harbour, about 200,000 troops had already been rescued. But there were many thousands more still pinned down on the beaches and in the harbour.

As Sundowner made its way into the harbour, Gerald moved bodies and wreckage out of the way with a boathook. They moored alongside the destroyer HMS Worcester and Charles went aboard to speak to its captain, who asked him how many men he could take.

‘Oh, about a hundred,’ he replied, knowing full well that Sundowner had only ever carried a maximum of 21 people to watch the Boat Race. The captain looked down at Sundowner and said: ‘Are you sure?’

Within minutes, weary soldiers were making their way onto Sundowner, some apologising for letting their country down.

Before they left England, Charles and Roger had stripped the boat of bunks, seats, tables and the cooker to create room.

As Charles counted the boarding men, Gerald ripped up sheets to act as bandages for those injured, while Roger guided them into every available space — including two in the bath and one in the toilet.

When the count reached 75 men, Charles told the troops to throw their boots and rifles in the harbour so they could squeeze in more of their comrades.

There was some grumbling, but all agreed. Sundowner, now much lower in the water, cast off from HMS Worcester and began its return journey to Ramsgate with 130 men aboard.

With her deck now covered in soldiers, Sundowner was an even more tempting target and soon the cruiser was attacked by both German bombers and fighters. But each time Charles successfully followed his late son Brian’s advice.

Down below, word spread among the soldiers that their skipper had been on board the Titanic. Some thought he would bring them bad luck, but others pointed out that if he had survived that disaster, Charles Lightoller could bring them safely to England.

The Channel was calm but the wash from the larger ships caused Sundowner to pitch and roll. To keep her steady, Charles used the trick from that infamous night 28 years before on the upturned Titanic lifeboat. He got all the men on deck to stand and face forwards and on his command to either: ‘Lean to the left! Lean to the right!’ depending on the swell.

Twelve hours after they set off, Sundowner arrived back at Ramsgate. On the quay, a Royal Navy officer carefully counted the troops as they disembarked.

Charles Lightoller remembered: ‘As the last ones went over the side, his remark stayed in my mind: “My God, matey! Where did you put them?” ’ Charles knew there was one man missing — and found the soldier fast asleep on the toilet, his head slumped on his lap.

Charles Lightoller’s remarkable life ended on December 8, 1952, at his home by the Thames. He was 78. His plucky cruiser Sundowner is now moored in Ramsgate Harbour, looked after by volunteers

Over 200 Royal Navy vessels and more than 800 civilian vessels made the rescue possible.

Unknown to Charles, his middle son Trevor, a Lieutenant in the Royal Signals, had been one of the soldiers rescued from Dunkirk two days before Sundowner sailed.

Tragically, Roger Lightoller, with him on Sundowner, was killed in the last month of the war, in command of a motor torpedo boat.

Today, Trevor’s son Tim Lightoller, 77, says: ‘I think my grandfather had the tremendous satisfaction that his voyage on Sundowner was carried out to the best of his capability, and he couldn’t have got another body on board.’

Tim Lightoller says, in fact, the best film portrayal of his grandfather was by Kenneth More in the 1958 Titanic epic A Night To Remember.

In the 1950s, Charles and the then eight-year-old Tim would go on voyages on Sundowner.

‘He put tremendous trust in me. But I’ve never worked so hard in my life! I had to be up, with the deck scrubbed by 7.30 in the morning.’

In 1960 Tim joined the Royal Navy, eventually becoming a captain on nuclear submarines. Tim says wryly: ‘Unlike my grandfather, I made my sinkings equal my number of surfacings.’

Charles Lightoller’s remarkable life ended on December 8, 1952, at his home by the Thames. He was 78. His plucky cruiser Sundowner is now moored in Ramsgate Harbour, looked after by volunteers.