President Trump made it official that social distancing and other coronavirus guidelines would extend beyond Easter and through the end of April by debuting new signage at Tuesday’s White House press briefing.

Reporters were given handouts spelling out the new policy: ’30 Days to Slow the Spread,’ as the television screens that flanked the briefing room podium also relayed the message.

‘Each of us has the power to our own choices and actions to save American lives and rescue the most vulnerable among us. That’s why we really have to do what we all know is right. Every citizen is being called upon to make sacrifices,’ Trump said at the top of the briefing. ‘Every citizen is being asked to fulfill their patriotic duty in making fundamental changes to how we live, work, and interact each and every day.’ 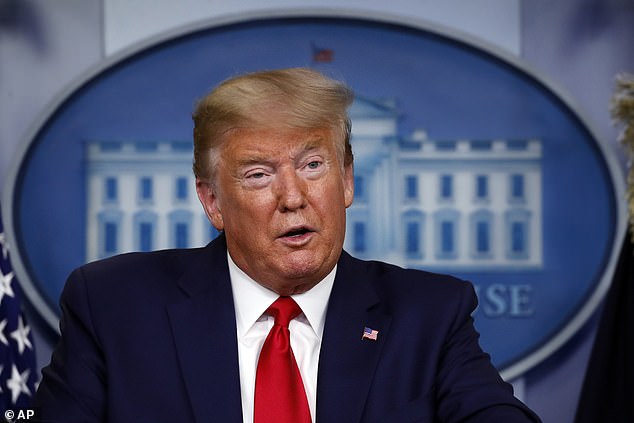 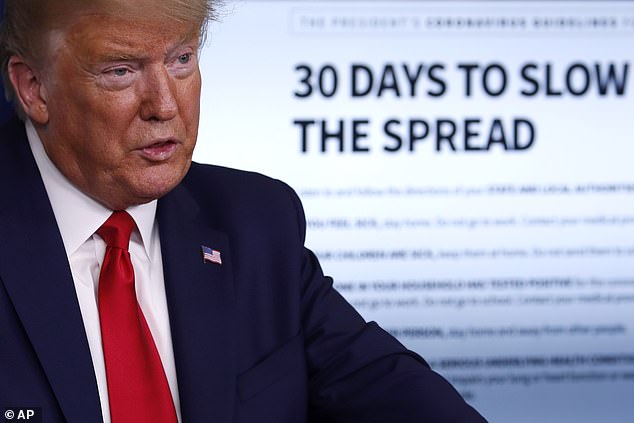 ‘And I wouldn’t be surprised to see this going on long into the future when this virus is gone and faded,’ the president added.

On Sunday, Trump had previewed the move, telling reporters in the White House Rose Garden that he would extend ’15 Days to Slow the Spread’ through April 30.

He said his medical experts would show some of the data sets Tuesday that led him to make the decision.

The week before, the president had floated the Easter holiday, which falls on April 12, to open back up American businesses, as some conservative allies pressed Trump to save the economy.

But Trump’s medical experts impressed upon him that more than a million Americans could die if social distancing guidelines were relaxed prematurely.

Even with the mitigation measures put into place, Dr. Anthony Fauci said Tuesday that the country should be prepared to lose 100,000.

‘Think about what would have happened if we hadn’t done anything?’ Trump said, commenting on the grim statistic.

‘I’ve had many friends, business people, people with great common sense … they said, why don’t we ride it out,’ Trump recalled. ‘And think of it as the flu.’

‘But it’s not the flu, it’s vicious,’ the president said.